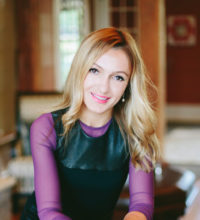 Mariya Vysotskaya is a champion professional ballroom dancer, instructor, coach and social entrepreneur. She is the Founder and Executive Director of Dancing Classrooms Greater Richmond, which has taught thousands of young people the value of teamwork and discipline as they learn to lead, follow and succeed through the art of ballroom dance. Mariya is a native of Kaliningrad, Russia. She competes as a professional, teaches, both adults and children and coaches to the current United States Amateur Champions. Mariya’s greatest joy is helping children, particularly those who may face disadvantages, know that through hard work they can succeed. Mariya says that when two people move across the floor to beautiful music, they are sharing their humanity. Being able to see past race, position, language, size, and focus on the humanity of another person is a skill that will prepare our children to take their place in a complex and diverse world. Continue Reading

Most recently their influence has extended into films, with the major motion picture Take The Lead. The film, starring Antonio Banderas as Pierre Dulaine, was inspired by Pierre”s teaching experience in schools.